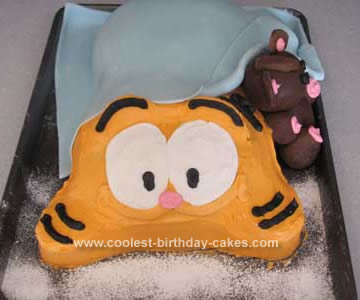 I made this Homemade Garfield Cake for my granddaughter’s seventh birthday. This cake was actually how I found this site, it was created based on a couple of cakes I found right here at coolest-cakes. I created it out of three cake mixes, two baked in a porcelain bowl for the head and body, and one in a 10-inch round pan to construct the paws and tail out of. (The tail ended up covered up with the ‘blanket’.) I was a little dubious about baking in a bowl but it turned out fantastic.

It’s iced with butter cream icing, homemade and a couple of tubs of premixed Wilton decorator icing. We decided to add Pooky with Garfield, he is composed entirely of chocolate fondant with icing eyes and details. We weren’t sure how to create him and I think this came out quite nicely.

Garfield’s blanket is also fondant, rolled thin and trimmed. The ears are cardboard half-circles covered in icing. Details were deceptively simple; coloring the icing was the hardest part! I just used a large round tip with different colors-the whites of the eyes were just some untinted butter cream that I piped on and then smoothed out with a metal spatula. All other details were done with the same tip.

For ease of transport and lack of anything laying around I could use, I constructed the cake on a large baking sheet. If I did it again I’d probably ice the baking sheet first or line it with fondant. This was a lot easier than the last cake I did, which was tiered-I’d rather make this type of character cake any day. 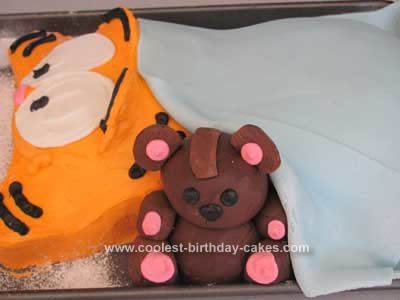