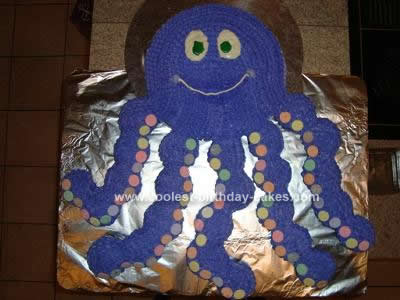 I made this Giant Octopus Birthday Cake Idea for my three year old son’s 3rd Birthday. It was an “Under the Sea” party. It was my second attempt at making a cool cake, he’s second birthday being the first. It’s super easy to make.

You need a large round cake for the head, any size really, and enough cupcakes for as many tentacles as you want. This cake was HUGE, like 2 1/2 feet by 2 feet. And even though it was so big I still couldn’t fit eight tentacles on him so he only had six.

You could also make him any color. I chose purple but read or blue would be cute too. Place the cupcakes in the position you want making them look wavy and then frost the entire thing to look like one piece. I used Necco candies for the suckers and then I added two simple eyes and a simple little mouth.

The cake was a hit and because of it I now sell cakes every once in a while.