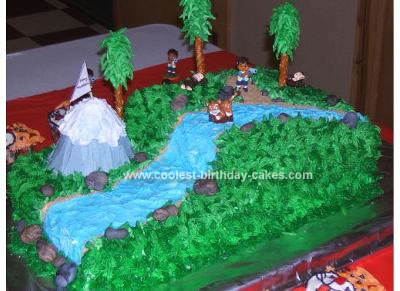 This Go Diego Go Birthday Cake was made for my son’s 4th Birthday. He LOVES Diego and Baby Jaguar.

As with all complicated cakes, this one took two decorators. My friend Becky and I decorated this cake very quickly!

We used two cakes, one for the base and the other cut in half and stacked on top. We frosted a layer and then drew out the river and frosted inside our area the blue water adding in the white for waves. Then we made a path for Diego to stand- using brown sugar and crackers mixed together.

The rocks were made by Becky’s daughter’s with fondant swirled lightly inside. We formed the mountain, frosted it and stuck a tooth pick in it that said “snowy mountain”.

The grass was piped on using the grass tip and two different colors of icing, alternating between the two. It was hard to get the frosting to stick to the sides, but patience helped a lot with that. The trees were made with pretzels and we stuck a plastic Diego, Baby Jaguar and monkey onto the cake.

This was a super cool Diego Cake!