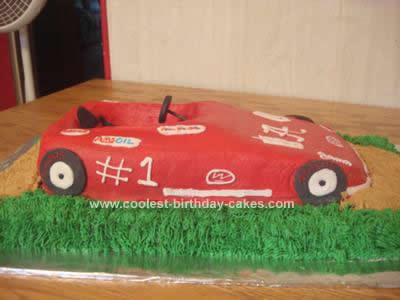 My friend’s son races go-karts for fun! He has an Alabama go-kart and wanted a Go Kart Birthday Cake Design to match his actual kart, since they were going to have his birthday party at the race track!

I started with a race car cake pan, used Duncan Hines Butter Golden cake mix, and cut the top off/out to make the seat part of the kart. I iced with Wilton buttercream, and smoothed it down with a Viva papertowel. I added all the little sponsor stickers and designs with icing, and then used fondant to make the tires, steering wheel, and seat. I put it on another cake that was made to look like a dirt track.

The track was made out of buttercream icing covered in graham cracker crumbs, then I piped in some grass and added finishing touches!! He loved it! It was a huge hit and it matched his kart wonderfully! It wasn’t as hard as I first thought it would be, but it did have a little weight to it as it was two cakes.