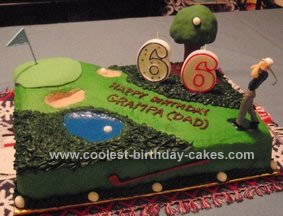 I wanted to make a cake for my father last year when he retired, and also for his birthday. He loves golf so I decided on making a golf cake for him. Since my father loves Boston Cream Pie, I made one using a 9×13 pan and divided it into three layers and filled it with pastry cream. I covered the cake with buttercream frosting. I used a leaf tip to make the “rough” and the boarder around the bottom. The green was made using a piece of fondant to make it stand out from the fairway.

The tree was made using rice krispy treats that I shaped, coated with a thin layer of buttercream, then after it set applied fondant to the trunk and top. The sand traps were made by carving out indents and layering buttercream and brown sugar; the pond was made the same way, and I mixed blue frosting with cornsyrup to get the glossy look of the water. My father thinks that he’s entitled to as many “mulligans” as he wants, so I put three on his cake; in the tree, the sand, and the water.