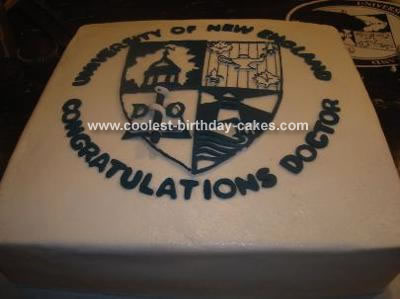 My cousin was graduating from Medical school so I wanted to have the perfect cake that would show my admiration for her hard work. So far I don’t sell my cakes but make them for family and friends. When I make my cakes I try to make the next cake top the last. When I asked her what she wanted for a cake the soon to be doctor said “nothing with flowers”. Finally I decided to decorate her cake with the school’s crest.

I enlarged the crest on a copy machine and began cutting my pieces out of fondant. This was one project that I learned the most from. The fondant pieces were so small and detailed that the crest kept breaking apart. I threw away many fondant crests before I realized that I could use navy blue royal icing as glue to stick the broken pieces back together.

I frosted the graduation cake, added the crest and for the lettering I used the alphabet fondant cutters, and placed the greeting on the cake around the crest.

This cake was a challenge, but it was worth the gray hair.