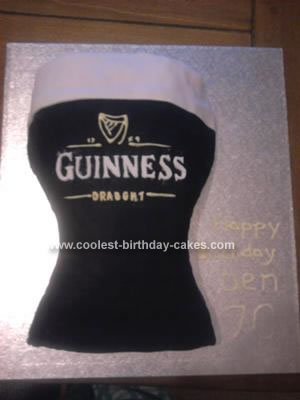 I made this cake for a family friend and they were very happy with it. I baked the cake in a roasting tin putting some grease proof paper in the bottom to line the tin before putting the cake mixture in. it also make it easier to get the cake out after baking. As it was such a large cake it too about 1 hour 45 mins to cook i put some paper over the top of the cake too after about half an hour of it cooking so the top didnt burn. The cake its self was a normal sponge with jam and butter cream in the middle. When the cake had cooled i carved it into the same of a pint glass then cut it in half so i could put the jam and cream inside after i covered with black and white fondant icing and piped the picture and lines and used white fondant for the letters. If i did this cake again i would buy some cutters for the letters as they took a while to cut out.