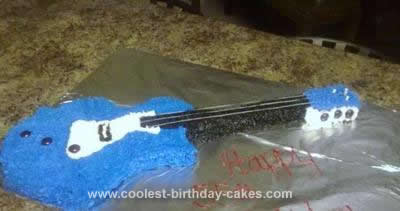 My dad’s birthday was approaching and at the last minute I remembered I needed to make a cake! My dad loves guitars. He has a room at my parents house just for guitars! So I thought to myself oh no, his birthday is in three days and I don’t have a guitar cake pan so I thought about it and I remember I had a guitar for the xbox. So I found a cardboard box and outlined the guitar on it.

I then took two 13 by 9 inch pans and baked a two layer cake in each pan at 350 for about 40 minutes and allowed them to cool for a few hours. I then placed them on the cake board I was using for the cake itself and took the outline of the guitar I had cut out and placed it and took a knife and began cutting around the edges. Some areas I had to much cake left over, like around the neck of the guitar, and some I needed to add a little so I took the excess and placed it where it was needed.

I then took icing and stuck all the areas that were added on with icing to make them stay together. I iced the whole cake with buttercream icing. I then took and picture of one on my dads actual guitars and made a cake replica with the colors and all.

I used the star tip and piped with royal blue, black, and white. It took about an hour to do all the piping and icing.

For the strings, I tied mint dental floss on to lollipop sticks placed them at the top and the bottom and if they were too loose, I just turned them to make them tighter (kinda like tuning a guitar!). The little black circle candies are junior mints.

For a last minute cake idea, this Guitar Birthday Cake Design turned out great. Very moist and my dad was very impressed. People I showed pictures of it to couldn’t believe it was a cake, they just thought I was showing them a guitar!