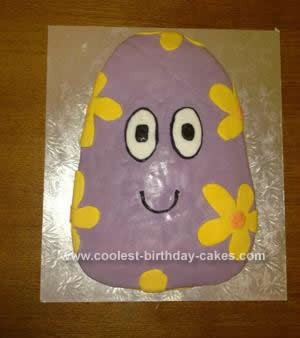 Here is the HAAHOO Birthday Cake I made for my daughter’s 3rd birthday. I was a bit stuck for ideas until my son suggested making her a Haahoo as she has a Haahoo cushion that she loves.

I made the cake in a large roasting tin making two mixes of cake one yellow and one purple. I put the two mixes in one on top of the other. This time round I had to colour the icing myself which I did with some gel colouring. It was a lot easier than I expected and I was pleased with how the colours turned out.

I cut the shape of the Haahoo out once the cake was cooked & cooled. I then sliced the cake through the middle and put in a layer of jam and butter cream. Then it was onto the icing, firstly I covered the cake in purple icing and then drew a flower as a template and made some yellow icing and cut some flowers out of it. I then added some red to the rest of the yellow icing to make orange for the middle of the flowers.

I then made the eyes with some white icing. For the pupils I added some cocoa powder to the icing before adding some black gel and then put the pupils on the eyes and the black detail around the eyes and made the mouth. And there I had a Haahoo cake and one very happy daughter. 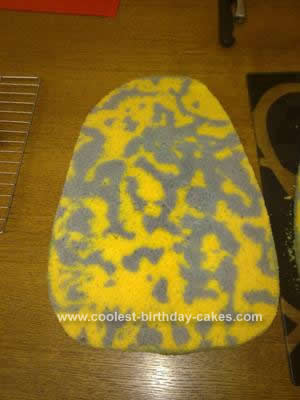