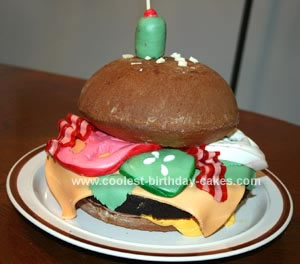 My daughter was bored with regular birthday cakes. I had the idea for a Hamburger Birthday Cake for a long time, but never tried it before. I looked online and found tips here; especially using fondant, (which I had never heard of).

I spread “mayo” on the bottom bun (white buttercream frosting), and tinted some red, for “ketchup”, and yellow for “mustard”. I placed the brownie as the “meat” on top of that. The toppings are made from homemade marshmallow rolled fondant, (a play dough like frosting made out of melted marshmallows mixed with powdered sugar, (easy to make- though messy.)

The “cheese”, “onion” and “lettuce” were rolled and cut out of the fondant. (Hindsight, I would have gathered the “lettuce” a bit to make it more realistic, but I was running out of time.) The “bacon” is actually strawberry and yogurt flavored striped fruit roll up strips. I used chopped almonds for the “sesame seeds”, (though if I had time I would have formed those out of the fondant too). The “olive” was fondant held in place with a wooden skewer as a tooth pick.