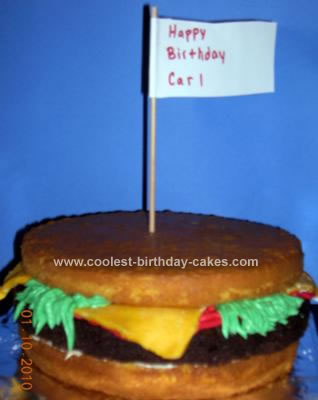 I made this homemade hamburger birthday cake with two yellow cake mixes for the buns, and a chocolate brownie for the meat patty. For the lettuce I just mixed some green butter cream icing and used my leaf tip to add the greenery. I added swirls of red and yellow icing for ketchup and mustard and tried to drape over the edge of the brownie so they would be seen.

To make the cheese I scrapped the filling out of about a half of a package of double stuffed Oreos, mixed them all together in a bowl with some yellow food coloring, rolled it out and cut right triangles to drape over the edge. Because of the brownie’s sweetness between the two layers of cake, I just left the buns cake unfrosted. It was sweet enough and created a really cool flavor and was neat with the different textures in your mouth.

I didn’t think of this then but it would be neat for serving at a party if you had some squeeze bottle full of red and yellow icing out on the table for the guest to add more icing if they wanted it.