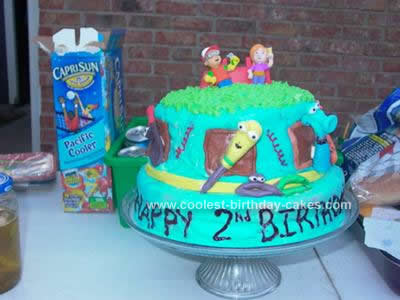 I made my son’s two tier cake from white and chocolate cake and marshmallow fondant. The marshmallow fondant actually tasted better than the regular store bought stuff. I carved out the middle and added jam to each layer also. I then covered the bottom layer in the fondant and then added the second layer and covered it and then made grass on the top.

I then made the characters each one individually with the kids out of fondant and food coloring. The top tier I tried to make Handy Manny but he didn’t turn out to well. So I used a small Manny and Kelly my son had and his car. I took the original toys and set them in front of me as I sculpted each character. Then I stuck a tooth pick in the back of them and placed them into the cake so they had a support system.