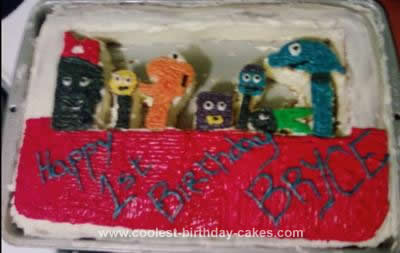 This Handy Manny Tool Box 1st Birthday Cake I made for my nephew’s birthday. He loved the show Handy Manny so I decided to make him a little tool box. I took a 9x13x2 as well as a smaller rectangular cake pan and made from 2 white cake mixes. I then made Butter Cream Frosting and colored it to the colors of each tool on the show. I cut the tools out in the actual cake. I did not use any patterns, if it makes it easier, just cut out a window and use some from that as well as the extra pan.

I bought a cake decorating kit from Wal-Mart and used the smallest tip to decorate the “Tools” and the medium tip for the outer edge the “Tool Box” in this picture. I was running out of time and I needed to take the pic before I finished the Handle, it was red as well. To complete this cake it took me 2 days but that was only because I had to work, this should have taken me a total of 6 hours, that’s because I cut the pieces out of the cake. It will take less if cut and added to the cake. Another tip for the frosting, don’t use the piping bags out of the Wal-Mart kit, use zip loc bags, much easier!!