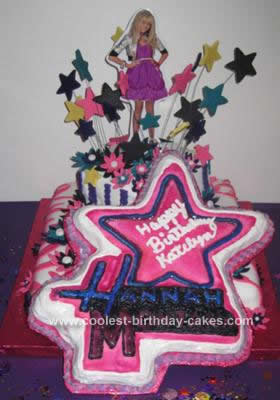 We had a big birthday party for our daughter so the Hannah Montana pan that she picked out was not big enough for everyone. I planned to have three-stacked cake and then put the Hannah Montana Birthday Cake on the front like a plaque. I made all three sized cakes, layered, and filled them. To keep with the theme, I made the cakes different colors so when I layered them they were all different colors (teal, pink, and purple).

I then covered all of them in fondant. I had plenty of flowers and stars that were made of fondant earlier in the week so that they could dry out and harden. After covering them in fondant, I started decorating using tinted fondant and making the bottom layer pink zebra stripes. I was attempting to put the skewers in the bottom of the second layer and splat! It landed on the floor. Not too happy at this point!

Anyway, I got the smaller top layer done and decorated it with purple stripes. I put the two layers together and started adding the flowers and stars. I placed the HM statue on top. Since the HM pan was not big enough, I decided to fill it with rice krispie treats and cover it with fondant. I then sprayed it with pink icing spray and fill in all the other parts with either buttercream or glitter gel. I then put it on a pink covered board and piped stars around the bottom. I had to do this since I was lacking a layer to hold it up. I just laid it on top of the stacked cakes.

In the end, I guess that it worked out great. There was not much left and those that don’t care for cake were able to have the rice krispie treat. 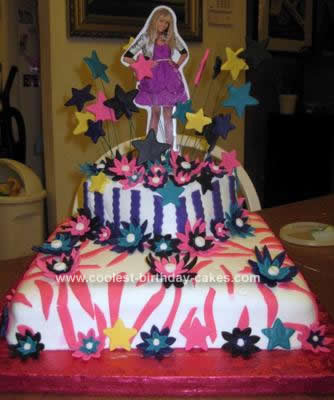 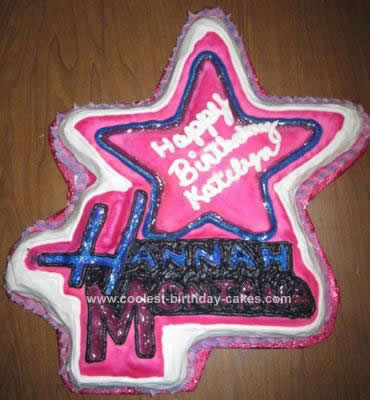