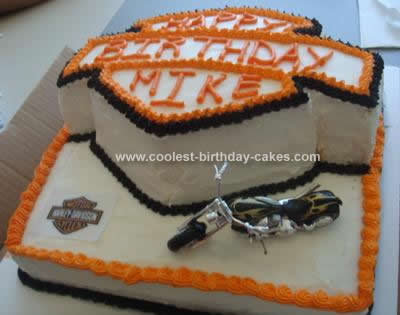 This Harley Birthday Cake was for my boyfriend, I surprised him at work.

I took a picture of the Harley emblem and cut it out of a 1/4 sheet cake, sliced in half, iced it with buttercreme. Bottom was a half sheet cake. Again cut in half and iced it. Then did orange and black shell tip border. Everyone loved the cake except the black stained your teeth.

The picture in the corner was a smaller picture of what I used to trace out the top layer. Thought the corner was boring since the toy bike was in the other so I stuck it there.