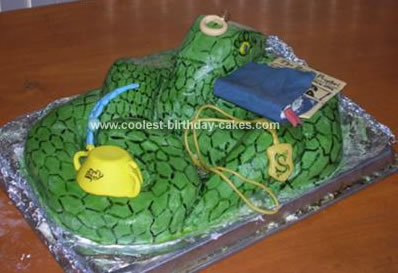 This Harry Potter Horcrux Cake is a homemade white cake with green butter cream frosting. The cake was then layered and coiled on top of each other. The head of the snake was shaped by using rice cereal and marshmallows. We did a dirty layer of frosting to get rid of crumbs and then smoothed with two additional thin layers by using a wet knife to get the right smootheness.

Also, instead of butter we used shortening as well as meringue powder in the frosting because it holds up better. The scales were painted with mixing food coloring with peppermint oil (or you could use any extract that has a high alcohol content). All the other Horcruxes were hand shaped made by using gum paste which set up nicely. All other painted embellishments were done with the same procedure as explained before.

This was done for Harry Potter’s birthday party right after the sixth movie came out. It could be used for any one’s Harry Potter party