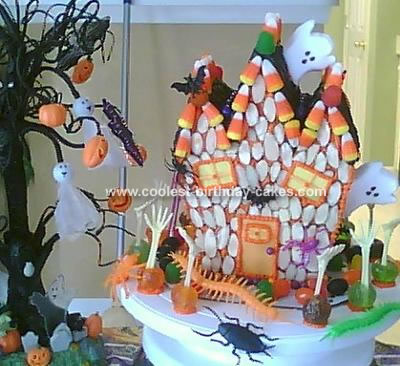 My grandchildren love gingerbread houses, and I love making them. This haunted house cake one was super easy, because I started with one of the Wilton pre-assembled houses. I did however make my own icing (the standard royal icing recipe), because it has been my experience in the past that the premade ones don’t harden as well, so that makes it harder to hold the candy pieces in place.

I used black royal icing to decorate the roof. I put a coat of icing on with a spatula, and when it was almost dry, I made “shingles” by using the black royal icing, and a #2 tip to make half circle loops across the roof, connecting each row with the next one above it.

The windows and doors are made from Starburst Candies. I put them between 2 pieces of waxed paper, and used a rolling pin to flatten them, then they were cut into the shapes I needed with a sharp knife. The cross pieces in the windows are also made from Starburst. Kids seem to find the Starburst a much tastier choice than fondant. Royal Icing was used to fasten the windows and doors onto the walls of the house. I next used orange royal icing as the “mortar” to hold the sliced almond “stonework” in place.

The icing dries quickly, so work in small areas at a time. This is a part of the construction that even little people can help with. Candy corn, gumdrops, and other small assorted candies were used to decorate the house. I even found skeleton lollipops at my local grocery store and they made a great fence. The ghosts are the marshmallow peeps. I cut the ones on the top of the house at an angle to look like they were coming out of the roof.

I used plastic bats, spiders, skeletons, etc. as accent pieces. They came from the local dollar store, and when I used spider webbing on the table, they stayed all around the castle and added a lot to the aesthetics of the project. If you use a preassembled house, this can easily be completed in 4 – 5 hour (depending of course on how much little people help you have)