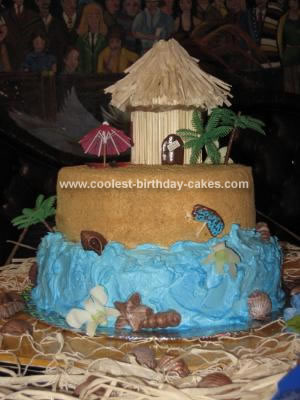 I made this Hawaiian Island Cake for a rehearsal dinner for my best friend’s wedding. They were going to Hawaii for their honeymoon, so decided on a Luau themed dinner.

The ocean layer is two 12 inch round chocolate cakes with chocolate mouse filling. The island is two 10 inch round lemon cakes with fresh strawberries and blueberries in a cheesecake mouse filling. All are frosted with a non-dairy whipped frosting found and Smart n Final. I like this frosting the best because it is light in flavor and easy to work with, as long as you don’t over whip it.

First I assembled the cakes layering with the fillings and applied a crumb coat. I like to let the crumb coat set up on the cake for a while in the fridge. That way the filling has time to set as well.

To make the bottom layer look like rolling waves of the ocean I generously frosted it with blue frosting. I continued the frosting up the side of the cake and in about an inch and a half in on the top. I left the rest of the top frosted flat so the island would be able to sit level.

Next, I covered the top layer in a light coat of frosting tinted to a light tan/brown color to match the sand. I immediately covered that with gram cracker crumbs which were processed in my food processor. I found this gives the most even consistency. I tried to make it heaver is some areas and lighter in others, giving it a more natural sandy look. Be careful not to use too much crumbs though, it will make a mess all over your ocean when you assemble them.

Before assembling the cake make sure you give the bottom layer some support by adding wooden dowels or cake supports cute even to the height of the bottom layer. I usually use 3 to provide a stable support. Now carefully place the island layer on top of the ocean, don’t worry if some crumb fall into the ocean, you can cover them up with more waves.

After the cake is put together I went back and made more waves coming up onto the sides of the island with more blue frosting. You want this to be uneven, giving it a more flowing appearance. To make the waves come alive even more I sprayed it lightly with the blue spray food coloring which can be found at Micheal’s. Then I lightly sprinkled some white cake glitter to the high waves, giving it even more depth.

The Tiki Hut was made out of an empty tropical fruit cocktail can which I covered in bamboo skewers cut to length. To make the thatched top I bought a grass skirt from the dollar store and cut it to length, gluing the pieces to my roof support made of skewers. I made the door and shutters out of tootsie rolls flattened and molded to shape. Since this was for a wedding rehearsal dinner I printed up a “do not disturb” sign in small font from the computer and stuck it on the door. I also made a small sign reading “Lover’s Island” out of tootsie roll and put it on the front of the island. I used a toothpick to write the couple’s initials surrounded by a heart in the sand, as if it was something they did outside of their honeymoon hut. The umbrella is a drink umbrella and the towels are made of Fruit by The Foot cut to size.

The cake was finished off with white orchids and some chocolate shells that I made and dusted lightly with edible glitter. The orchids help give it a true island feel.

I had a lot of fun making this cake, and was actually one of the easiest to decorate so far. And the bride and groom to be loved it as well.