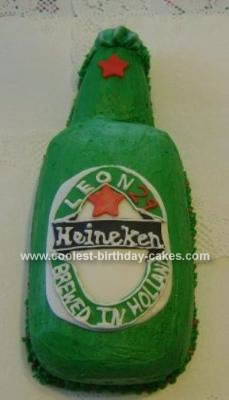 My name is Sarah Campbell from Long Island New York and this Heineken Beer Bottle Birthday Cake is my second cake on the website. It is a red velvet Heineken bottle cake made for my boyfriend Leon’s 29th birthday!

I started off using two separate pans to create the general shape of the cake. One big loaf pan then a smaller one for the neck of the bottle. Filled the pans with red velvet batter then after baking let the cakes chill in the freezer for easier sculpting. Using a bread knife I shaped out a bottle shape then began to mix up some buttercream icing from a general recipe of butter confectioners, shortening and almond extract. It took quite a lot of green dye to get the color I wanted but buy the flavorless and you wont have to worry about sacrificing the taste!

I then began to coat the cake with green icing and continued on to cut out the label using plain white fondant and dying the colors that I needed for the ribbon and the red star. Just to make sure I got perfect stars for my bottle I used a metal star cookie cutter. I then iced on the writing while making sure that I looked at a picture of a Heineken bottle to get the font exactly right, it’s a very important part of authenticity.

For the bottle cap I used green fondant, rolled out, then pleated and shaped it into a cap. To give it the metallic effect and that extra touch I used silver iridescent powder, fully edible and bought at a craft store, applied with a paint brush on the raised parts of the cap, that came out wonderful. I was very happy with it.

To finish off my cake I piped green trim all around the outside using a star tip! Then little red dots using a smaller piping tip. The good part about this cake was it was in December and the colors are Christmasy too! Hope you all love it, I know Leon did!