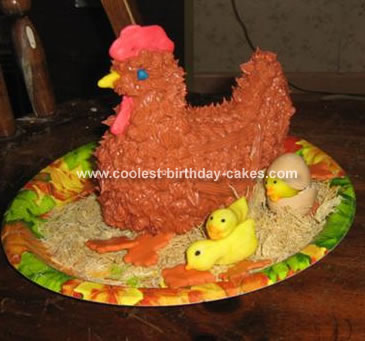 I first found the hen cake idea on this web site. As I raise chickens, I wanted to make a hen cake to enter into the local fair. I had seen cast aluminum 3D hen molds on eBay, and finally lucked out winning one.

I used a cake recipe that I found online, which was heavy enough for the stand up cake. I’d previously practiced with store-bought pound cake mixes, but that was getting costly.

I first frosted the cake with a crumb coat. The frosting was homemade buttercream/shortening. Then I used a star tip to do the entire body. I used a combed tip to make wings. The waddle, comb, and nose were made out of colored fondant, and I put a dab of blue frosting for the eyes.

My chicks were made out of fondant, and I colored their beaks and eyes with marker. The egg shell came from one of my hens. I used shredded wheat for the nest, and used a small maple leaf cookie cutter to make leaves out of fondant.

I received a blue ribbon for this cake, and it will definitely be re-created for several family chicken farmers’ birthdays!