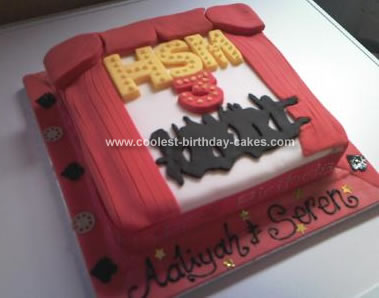 The High School Musical Cake is a Madeira, simple square cut into three slices, one filled with jam the other with vanilla buttercream. Cover the cake with buttercream before the icing is used.

Print out a picture to make into a silhouette for your feature picture, laminate it then cut it out to use as a stencil, be careful not to press too hard when cutting the icing! After you have laid the silhouette on the cake, paint it with black food colouring to give it a shine.

The curtains should be put on after. The numbers where cut with a scalpel by hand though you can buy stencils. Make sure the icing is nice and thick to give a better shape.