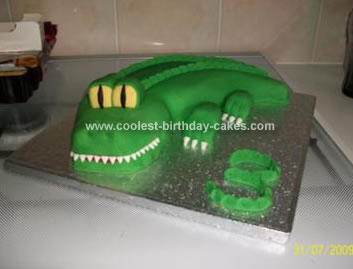 I made this Croc birthday cake with no instructions, which was no doubt why it took so long!

I made a multi-coloured cake by dividing the cake mix and adding food colouring. Once the cake had cooled, I cut out the head and body as one shape and made wedges for the legs. I cut out two eyes and put in small pieces for the nostrils. This was a bit fiddly and, like most cakes, I found the hardest part was the eyes.

The whole cake took lots of carving before I achieved the right shape. At first, I thought it looked too small but the butter icing and fondant bulked up the cake. I then cut a ‘v’ for the mouth area and added some sponge for the nose. I covered the body and head, first with butter icing and then with rolled-out green icing.

I covered the eyes with green and yellow icing and then rolled a small piece for the centre of the eyes, sticking these on by brushing water on the head. To form the mouth, I used the back of a knife to gently push the icing into the mouth. White icing created a tongue which was then tinted with red coloring. The teeth and claws were all individually cut and fixed on with water, which was a very fiddly process.

I then covered the feet with butter icing and fondant and again fixed them on with water. The scales on the back were made by rolling the icing into a sausage shape and pinching it with thumb and forefinger. I then used a fork to create the lines. The scales were again fixed on using water. I used my fingers to shape the outline of the nose, and the end of a spoon to do the nostrils.