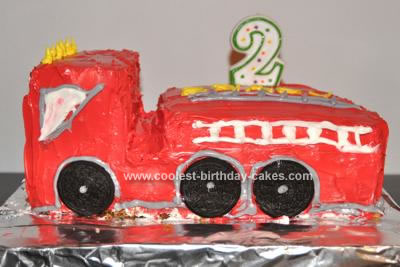 To make this Firetruck Birthday cake, I baked one 9″ x 13″ cake and one cake in a loaf pan.

The front of the firetruck was the loaf pan cake, cut in half and then placed standing up. The body of the truck was cut in a rectangular shape, the width of which matched the front of the truck. It was then cut into layers so I could ice the cake in between the layers. Someone told me to refridgerate the cake before icing it, and that really made it so much easier to ice and cut. I definitely recommend it.

I then covered the whole thing in red icing. The red icing is a pain; I suggest buying two large jars of food coloring as one jar will not make the red dark enough.

I ran out of time or I would have put many more details on the truck. I was literally drawing the windows as we were walking out the door to go to the party. But my 2 year old didn’t know the difference and he was thrilled with it. I’ve made two other shaped cakes before but I would say that this was the easiest since it is only a matter of cutting rectangles and layering them. Don’t be afraid if you’re a beginner; if you can do squares and rectangles, this is for you!