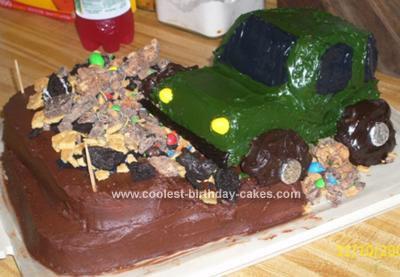 My boyfriend is a jeep enthusiast. So, there was no question as to what kind of cake I was going to make him. It was just the question of how. I actually got the idea of how to make the Homemade Jeep Cake from this site. I just slightly modified the set-up.

I used a 13 x 9 cake pan for the base. However, I roughly cut the base in half and stacked them to make it look like a rock. I tore part of the cake out to make a bigger space for the jeep to rest on. I used butter cake and chocolate icing for the base.

For the jeep itself, I used 2 loaf pans, stacked. I cut the top loaf pan in half at an angle for the windshield. I used butter cake again, but I had to use a white icing, like vanilla or cream cheese, so that I could dye the icing. At the craft store, I picked up some dye paste. I used mossy green and black. Mossy green for the jeep color and black for the windows and windshield.

To support the bottom of the jeep, I used the remaining part of the loaf pan that I cut to make the windshield. I put it under the jeep to prop it up as desired.

For the wheels, I used mini Crueller donuts. I couldn’t find any chocolate ones, so I used dark chocolate icing, and melted it and drizzled it over the tires. And for the hub caps, I used wrapped Hershey kisses. For the headlights and tail lights, I used M&Ms.

For and extra touch, I crushed M&Ms, Snickers, graham crackers, and Oreos just to make it look a little more rugged.