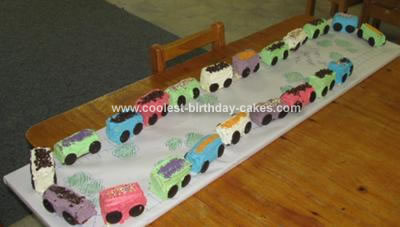 I made this very long mini train cake for my son’s fourth Birthday. He shared it with his preschool friends, and, by the looks on their faces, it was a big hit.

I wanted to keep it simple, so I started out by purchasing a few packets of small jam rolls, some vanilla and some chocolate. I also bought a madeira cake, which is basically an un-iced, dense butter cake in the shape of a rectangle, which I cut into smaller rectangles. I placed the cake in the freezer, as I find it easier to ice when the cake is cold.

The night before the party, I made vanilla butter icing and portioned this into smaller batches which would all be colored differently. Then it was simply a matter of icing individual carriages or wagons and adding some sprinkle decorations. Choc bits were great for coal but I did try to vary the coal’s color.

For the engine, I joined a rectangular cube to a jam roll, added some icing and then decorated as I did for the carriages and wagons. The wheels were round choc melts.

The beauty of this cake was that it didn’t need to be cut, the kids found it visually appealing, and I didn’t have to fiddle about making the actual cake! It wasn’t assembled on the tracks until a few minutes before serving, which meant it was easy to store in the fridge and not a problem to transport.

For the base, I converted a large shelf/plank into a railway track by covering it with some butcher’s paper. I did a very quick drawing to jazz it up a little, but, if I did this one again, I would make a little more effort with the drawing and base. The kids were impressed, and my son was so proud.