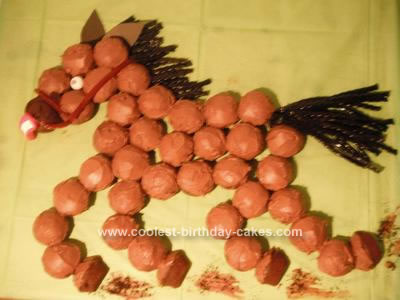 I have three sons and they are crazy about horses! They were turning 4, 3 and 2. They were all born in October. The oldest and youngest were both born on the 20th and the middle boy the 21st! So we had one big joint party!

We made this horse cupcake cake for their birthday party last year. It turned out great and was super easy to make! Just bake some cupcakes. Ice them and position them in the shape of a horse. We decided to make the horse look like it was running. We cut cupcakes in half to make the hooves and left them without icing. Black licorice was used for the mane and tail and red licorice for the bridle. A gumball eye was used from the Bulk Barn as well as the teeth lollipop. We used Oreo cookie crumbs stuck on a bit of icing for the dirt flying up.

It was a huge hit and so easy as each child just grabbed a cupcake. No cutting! As easy as pie, I mean cupcakes!