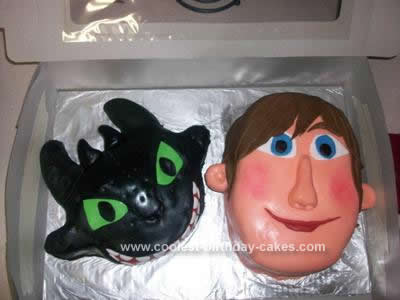 This How To Train Your Dragon Cake was a challenge! When I was asked to make a cake with this theme, the movie was so new that I didn’t really have much to go off of or examples to use. So in fear of messing up a 3D Dragon cake, I chose to make the faces of the characters and…drum roll please…it was a huge hit!!

It was pretty simple really. I made 2 13×9 cakes for the boy and 2 7×11 cakes for the dragon. I froze them all so that they carved nicely with few crumbs. Baking that many cakes, cooling, and waiting to freeze was pretty timestaking.

I used filling on each in between the cakes, and then I shaped them with a knife. I cut a small piece of cake to make the dragon’s nose elevated with more depth.

I covered them with buttercream frosting, which can be messing and difficult on smaller pieces because they want to fall apart! This is why having it as frozen as possible will make it much easier.

After that I covered them both with dyed fondant. I like to use the food gel coloring. After that I just played with using different colors of fondant and cutting out shapes to make the details on their faces.

In the end, the faces weren’t exact…but they were close enough to get the job done!

Coolest How To Train Your Dragon Cake

2 thoughts on “Cool Homemade How To Train Your Dragon Cake”