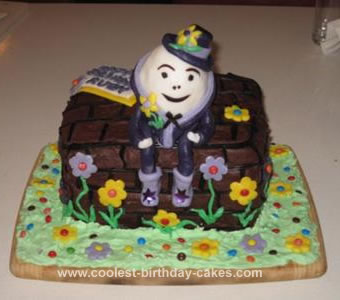 My daughter requested a homemade Humpty Dumpty birthday cake for her second birthday and initially I thought we would make a “flat one” but after Googling some pictures, I saw one on this website made with cupcakes which seemed feasible. Fortunately my mother is very creative and was enthusiastic about making it after I showed her some photos.

My mother covered the wall in chocolate icing/frosting and used strips of licorice for the “bricks” on the wall. The wall was decorated using fondant icing (just bought a big roll of white and used food colouring to make different colours), cut out flowers with a cookie cutter and the centres are M&M minis.

Humpty was covered in white fondant and his clothes are all coloured fondant too. His face is made from strips of licorice.

People at the party couldn’t believe it wasn’t store bought…and it tasted delicious too! My daughter was THRILLED….Thank you to my Mum : )