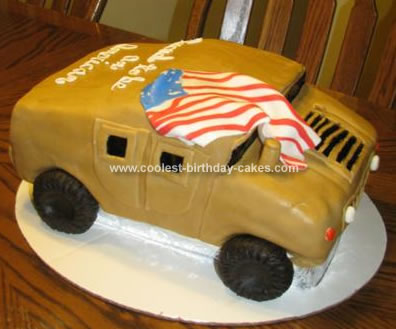 I was extremely nervous doing this Humvee Cake because I knew a lot of people would be seeing it. My husband was having a carry-in at work and asked if I could do a cake. Being that he works for AM General and Paints Humvees, I thought this would be appropriate.

This cakes was made with four layers (four cake mixes) with Buttercream centers. I used an 11x14in. pan. Two cake mixes per pan. Torted each to make the four layers. Next came the fun part. Shaping the cake. Really not too bad.

This was my first time actually attempting a 3

D cake. I used Fondant to cover the entire cake. The tires are made from chocolate fondant. I used a toothpick to make treads on the tires. To support the underneath of the cake, I used the lid of a shoe box wrapped in foil. This allowed for the wheels to actually look like they were under a wheel well instead of just being slapped on the side of the cake.

I painted the windows with black food coloring and water. Kinda messy! To add a bit of patriotism, I made a flag from fondant. To do this, I rolled out white fondant, cut a square of blue fondant, and placed it over the white in the left hand corner. Added some white dots of fondant to that. I then cut strips of red fondant and laid them out accordingly over the white. I used the rolling pin to mush it all together. I trimmed the flag to be even, and placed it on top of the Humvee. No, the stars on the flag don’t look like stars, but you get the point.

Overall, I was pleased with the cake, besides some of my fondant cracking and having to re-do it, I am happy with it. Everybody at my husband’s job really enjoyed it. Sad to see it be cut into, but hey that is what cake is for right?!