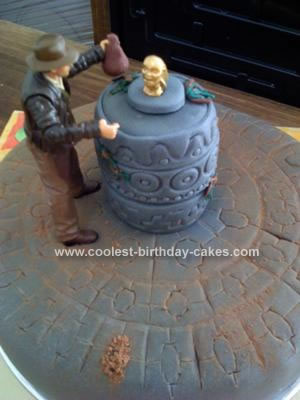 This Indi Birthday Cake was made for one of my friend´s son’s (Bruno), he is only 4, but he loves Indi, you cannot imagine how much he loves him. The idea came one day, when his father asked for a cake of Indi, but I´m not a real fan of Indi, so he sent to me some links to give us an idea of the first scene of the movie, and this is how the cake came up.

The cake was made of chocolate, and everything else, except for Indi and the idol, is fondant. What seems to be dust, is nothing else but cocoa. I´m not an expert, in fact it is my first official fondant cake but I loved to help Bruno´s father making his dreams come true, with an Indi cake. Next year we will be trying to make the fertility Idol.