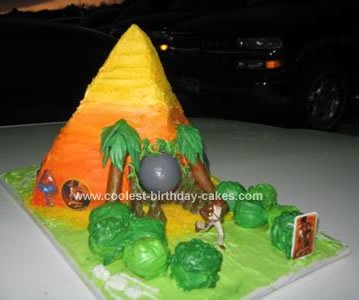 I made this Indiana Jones Birthday Cake for my grandson’s eighth birthday party. He couldn’t believe it neither could anyone else. I started with five layers of cake from large to small pans. I put butter creme inside and outside. I used one big dowel down the middle and a couple more on the sides to hold it in place.

I used the cake topper kit for the cave and big rock which was a little tricky to get it into the cake without a collapse but I covered up the edges with vines and that was good. I used the action figure and I stuck the rings with the skulls in the sides. I made the bushes out of cupcakes which was my grandson’s idea and it worked great. I made the palm trees out of a dowel covered with fondant and carved the palms out of fondant.

I covered the card board sheet base with frosting and then sprinkled the pyramid and floor with sanding sugar for the sand effect. I had a pretty fun time making this cake but the palm trees wouldn’t stand up and I had to lean them against the front of cake and the ride over in the front seat next to me was a little scary.