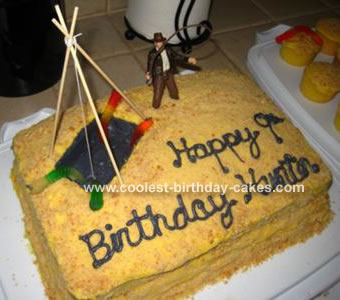 My nephew wanted an Indiana Jones cake for his 9th birthday party. My mom initially suggested that I make Indy’s famous fedora hat, but I felt that was way beyond my skill level. This is what I came up with instead:

The cake is a 9X13 sheet cake made from two box mixes. The frosting is buttercream, tinted with Wilton gels. After stacking the two cakes, I cut a 3″x4″ rectangular-shaped hole about 1 1/2″ deep into the top cake, leaving room for writing “Happy Birthday.” The “pit” was frosted with black frosting.

The “snakes” are gummy worms with black buttercream frosting eyes. To create the “tripod and rope” for Indy to descend into the pit, I used three kabob sticks and the same string you would use on a roast or a turkey. To anchor the string into the frosting, I tied the end of the string onto a toothpick and poked it down into the cake.

I also made cupcakes using sand-colored frosting and graham cracker crumbs with a gummy worm “snake” on each one. The whole thing didn’t take too long and my nephew loved it.