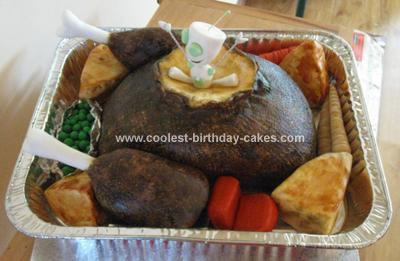 It seems there is a popular character on the web called GIR. He is a robot with Vadar Zim (?) and he dresses up in a green dog suit with a big zipper up the front when he visits earth so he doesn’t scare the population. My sister thinks he is wonderful. Me?!

So I made her this Invader Zim cake for her birthday. It is GIR jumping out of a turkey. Fans will know exactly what is going on.

To make this cake I baked a fruit cake (but any firm cake would do) in a half ball tin. Then I cut the two sides off so that there was a nice ‘turkey’ shape. I then cut the ends off the two side pieces. So I was left with the large middle piece for the body – two smaller pieces for the legs and four even smaller pieces which became potatoes.

I covered the cakes in rolled fondant. The turkey body was first covered with white fondant and then a second cover of pink fondant. This I textured with a (new) hard toothbrush to give it a skin look and curled the pink layer out on the top for GIR to burst out of.

For the legs – first I made the bones from fondant over a satay stick and let them harden. Then I covered the ‘meaty’ part with pink fondant, textured it with the toothbrush and poked the bone in.

To make the turkey look baked-using a paintbrush I stippled the body and legs all over with brown liquid food colouring. The four potatoes were covered with white rolled fondant and coloured with ivory liquid food colour.

I then arranged them all in an aluminum baking dish. GIR was hand modeled onto a toothpick and popped into the center.