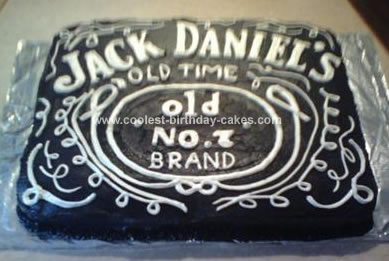 I made this Jack Daniels Birthday Cake for a good friend of mine who is a die hard Jack fan, it was his 50th birthday. This was one of my first cakes I ever made. It was made with yellow cake and I brushed on a pint of Jack Daniels when it had cooled down.

It took about four bottles of food coloring to get the frosting a true black and I made my letters out of gumpaste which I have also learned how to make myself. One thing I have learned with gumpaste is to make at least a week in advance in order for it do dry with color changes and breakage you must make two to three times as many pieces.

I used a logo but did my piping freehand so its not perfect. I made the cake a day in advance and frosted it and let it set in the fridge. The only downfall to a black cake was everyone’s black tongue!