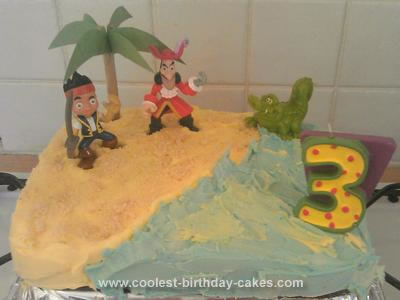 My son was really into Thomas the Tank Engine so I thoroughly researched cakes with this theme. He then changed his mind and now Jake and the Neverland Pirates is THE thing (that’s three year olds for you!) So I looked around this website and came up with this. It was THE EASIEST BIRTHDAY CAKE I’VE EVER MADE.

First, I baked a big square cake. Then mixed up a load of butter icing. I divided this into two bowls. One half I colored yellow then put this on the cake to one corner to make an island shape.

Next I placed three ‘Nice’ biscuits which are granular in texture inside a sandwich bag and broke them up. I then crushed the bag with the back of a spoon. Make sure you leave some slightly bigger bits too.

Sprinkle these on top of the yellow icing to make sand. Then stir some blue coloring into the other bowl of icing. Don’t stir it completely in. The white bits then show through giving a nice sea like consistency.

Place this icing onto the rest of the cake for sea. You don’t have to be too careful about this as when it overlaps it looks more like it’s waves at the seashore.

I then rolled some brown card to make a tree trunk for the palm tree and taped it to hold it. I cut four slits in the top. Then I cut three pairs of leaves so I could thread them across the top as in picture. I bought some Jake and the Neverland Pirates figures for £7.99 then placed them in the top.

Very very very easy and my son was so pleased with it. And so was I.