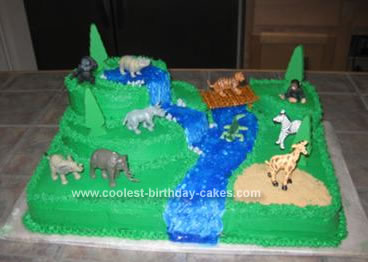 I made this Jungle Birthday Cake for my son’s Safari themed 5th Birthday party. I baked an 11×15 cake for the base, 9 inch round and 6 inch round. The piece to the right was a 1/4 cut from a 9 inch round. I leveled and crumb coated all cakes the night before decorating.

I iced all cakes with buttercream icing tinted dark green, except for the outline of the stream/waterfalls, which was light blue. I went over the blue icing with piping gel tinted blue and attempted a “slashing” effect on the waterfall areas with a little white icing on a toothpick. I made small gray rocks in various places along the water using small drops of white icing tinted with a little black using Wilton tip #4.

The bridge was created using a graham cracker cut to size with pretzels laid across it stuck to it with honey (Peanut butter would probably work better if there are no nut allergies at the party.) The ends of the graham cracker were stuck into the sides of the cakes and pretzels were also placed underneath the bridge for additional support.

The “dirt” under the giraffe was brown sugar. The layers were outlined using Wilton grass tip #233 and the bottom border was done with leaf tip #352.