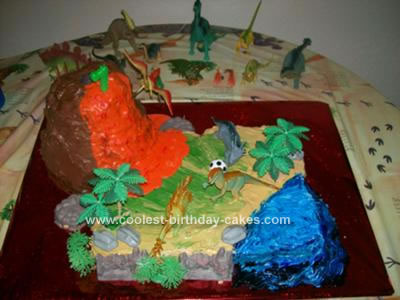 I made this homemade Jurassic birthday cake for my stepdaughter’s 7th birthday. She loves dinosaurs and soccer so I combined them. I used two 13×9 cakes for the land mass and cut the sides off making it look jagged. For the volcano I used 3 mixing bowls. I took the center part out of my angel food pan and stuck in the center of the bowl and poured the cake mix around it. I put a skinny bud vase in the center of the volcano and added water and dry ice when it was time to blow out her candle.

For the water I tinted piping gel. I bought a bucket of dinosaurs that came with trees and rocks and I used those as decorations. My stepdaughter had bigger dinosaurs that we used on and around the cake. I had a Terradactyl that I put on a Popsicle stick and stuck in the side of the volcano to make it look like he was flying.

The kids loved it!