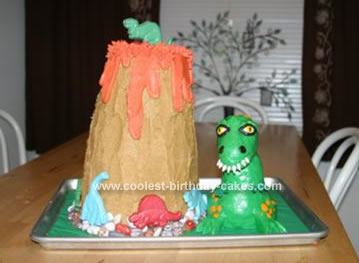 I started with boxed cake mixes, store bought whipped fudge icing, and homemade buttercream for the Jurassic Cake. I baked each cake in two 9″ cake pans. I then alternated vanilla and chocolate cake using three cake halves per layer. So, the cake was 3 tiers, and each tier consisted of cake, buttercream, cake, fudge, cake.

I stacked each tier onto cardboard rounds in decreasing sizes, so the bottom tier was sitting on an 8″ round, the 2nd tier was on a 7″ round, the 3rd on a 6″ round, and the top of the cake was carved to 5″. As I stacked each layer, I ran my serrated knife along the cardboard edges to shave an equal slope going up to make the volcano’s shape. I used cake supports inside each tier and one that went all the way from the bottom to the top (this means that you’d have to cut a hole in the center of each cardboard separator and then slide the cake down onto the post.

Once that was completed, I colored the remaining buttercream to tan and then an orangish red color. Because I had shaved cake off the sides of each layer it was a little more difficult to ice, but I just went slowly with more icing than necessary and once it was covered I scraped it off. I covered the whole thing in tan, then cooled it down and then added the red for the lava on top.

For the dinosaur I used rice krispie treats and homemade fondant. The homemade recipe was a little oily, but was A LOT easier to work with than the store bought stuff that I used for my daughter’s cake last year. I dyed several colors (all food coloring used was Wilton gel colors). I made 1 recipe of rice krispies in two different batches, sculpting the body first, then the head and tail with the 2nd batch. I chilled them in the fridge then covered them with the green fondant. I didn’t worry too much about getting it all covered in one piece as the fondant recipe that I used did allow any overlaps or seams to be smoothed out pretty well.

I modeled the dinosaur after a toy alligator that my son has in his collection. Using the other colors I added details like eyes, spots, teeth (which was white fondant wrapped around toothpicks). Finally I sculpted two feet out of fondant and decided to use pipe cleaners for the arms because the fondant didn’t see sturdy enough to just hang off the front like a T Rex’s arms would.

This cake took me the better part of 2 days, but my son seemed really thrilled with it!