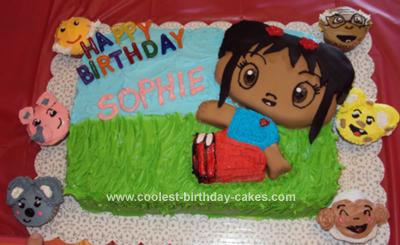 I was asked to make my niece Sophie’s 2nd birthday cake. One of her favorite television shows is Kie, Kie or Ni hao Kai-lan. I didn’t have a clue who Kie Kie was, so I looked the show up on nickjr.com. I started by watching the show, it’s a really cute children’s show.

I then printed off 2 of the same coloring sheets on card stock paper from the website, to be cut out and used as a stencil for the cake. After seeing the show, I decided that I had to figure out how to incorporate her friends into the cake, then I thought of cupcakes.

The cake part was made of 2 fun-fetti cake mixes; I used an 11×15 cake pan. Kai-lan and the cupcakes were made from 1 strawberry cake mix. I filled 12 cupcake liners with half the cake batter and I used a disposable aluminum 12×8 pan for the remainder of the batter. I baked the cakes as directed on the box; of course all ovens vary a bit.

While the cakes baked and cooled, I began mixing my colored icings. I decided to buy my icing instead of making it, so I bought the Wilton 5lb tub of decorator’s cake icing. That sounds like a lot of icing, but from experience I had 3 extra cake icings on hand, just in case.

I also purchased Wilton ready to use icing in black to use any outlining and for hair, Wilton sparkle gel in red and Wilton rolled fondant natural colors multi-pack for her hair, head, face and arms. For Kai-lan’s body and her friends I used the following Wilton icing colors; red, lemon yellow, orange, brown, sky blue, and leaf green.

I started by decorating the 11×15 cake in two colors, light blue for the sky and green for the grass. I made swirl marks to look like clouds and large fork marks to look like grass. I then used my template to cut out Kai-lan. I cut out her head, hair and body separately.

I covered her head and arms in fondant and mixed the light brown and pink together to get a lighter skin color for Kai-lan. I used the black fondant for her hair. I iced the body and used the red decorators gel for her heart on her shirt and for her shoes. I placed it on the cake first and then added her head. I used toothpicks to prop her hair just below her head.

Then I iced the 12 cupcakes, 2 each for her friends; Rintoo the tiger, Lulu the rhino, Hoho the monkey, Tolee the Koala bear, YeYe her grandfather and the Sun. For the ears I used vanilla wafers and mini vanilla wafers.

This was the first time I ever used fondant, it was easier than I thought it would be. Everybody loved this homemade Kai Lan and Friends cupcakes and birthday cake and when Sophie saw it she said “that’s my Kie, Kie”. What more could an aunt ask for?!