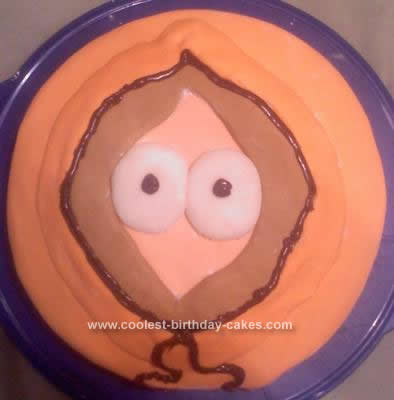 My 15 year old niece has a good friend named Kenny, and she was teasing him about having the same name as the South Park character one day. A little while later, she needed some cheering up so I decided to make her a Kenny cake to make her smile. Instead of “you killed Kenny” like the show, this was “you ate Kenny!”

I made two round cakes and covered them in simple white icing. I then rolled out some tan fondant for his face and a whole lot of orange fondant for his coat-hood. A couple of eyes and a little detailing and Kenny was ready! I surprised her by taking the cake over before she left for school in the morning, and she LOVED it! Even her friend Kenny thought it was funny and she even went as far as to take pictures with her phone so that she could show off to all her friends at school.