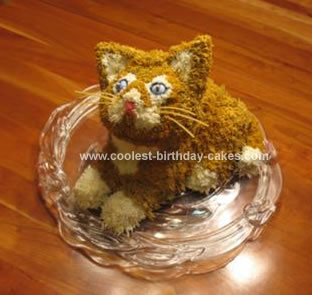 First off, this was the hardest cake I’ve ever made (but also the most rewarding). I wouldn’t recommend attempting it unless you already have some 3D cake experience under your belt and some confidence. It can be daunting when you’re trying to get things to stay together. My daughter really wanted a 3D kitten cake this year. I wasn’t sure how to go about it and couldn’t find any on-line that I really liked, (just the usual round faces on a platter), so I used a picture of an actual kitten (from a Google image search, of course).

Here are the basics: I baked a round 9 inch cake (halved and then frosted together upright for the body), one small rectangular cake (for cut-outs of ears, legs, paws, tail), and one cake in a small aluminum mixing bowl. I had to do a lot of “carving” to get the shapes just right but this wasn’t hard to do after freezing the cakes and using a sharp serrated knife. (The key is in the freezing!)

The back legs were made of two parts: two circles (I used a large jar as a “cookie cutter” to make cut outs from the rectangular cake. These were then frosted to the “body” standing upright.) and then two “paws” which were just cut out free hand with a knife. I used a dowel (chopstick cut in half) to hold the head onto the body. The ears were tricky (the right one I did 3 times) and I used toothpicks to hold them on. (I would recommend chopsticks because that right ear started sliding and I had to add a lot more toothpicks!)

I crumb coated everything with white frosting and then mixed orange and light brown frosting in the same bag (half and half) to get the mottled color effect). I used the “grass” or “hair” tip (which has about 12 small holes in it). This is my new favorite tip. It’s so much fun to use!

The face was very hard to get right. Eyes are tricky. These are Cadbury chocolate eggs with the pointy end of the egg pushed into the cake. I then used black frosting with a small tip to give them a less round appearance. And black and white frosting for the pupils. The mouth is just a little pink frosting. The whiskers are thin spaghetti noodles (angel hair would have been better) that I boiled for just a few minutes to soften them up a little bit.

It was a bit stressful to make as I had no idea how it would come out but, I must say I was very pleased. My daughter was absolutely delighted – and, of course, that’s the best part. (It WAS hard to slice up – although the 7 year old girls didn’t seem to mind. They all requested various body parts.