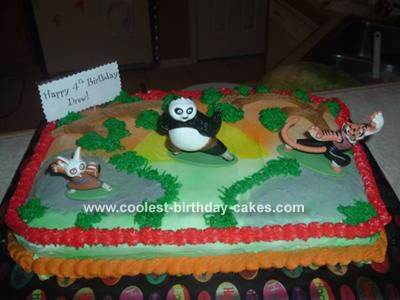 This idea for the Kung Fu Panda cake came from my local supermarket. My son had his heart set on this cake but, they wanted so much $$$ to make it, I decided to do it myself. I did order the cake toppers from the store.

I started by baking a 1/4 sheet cake. When it cooled I frosted it with white buttercream. I then cut the sunset templates out of cardstock. I covered the top portion of the cake with the templates and sprayed the bottom half and sides of the cake with Wilton spray green tint.

Next I mixed the brown and green frosting. Using a large star tip I piped the tree and branches. I then used a grass tip to pipe the tree leaves.

Next I mixed a small amount of gray frosting and outlined the rocks and filled in. I then piped more grass around the rocks.

I then placed the figures on the top and added the happy birthday sign that I attached with toothpicks in the corner of the cake.

My son loved it and I was able to create what the store would have for less then half of what they were asking.