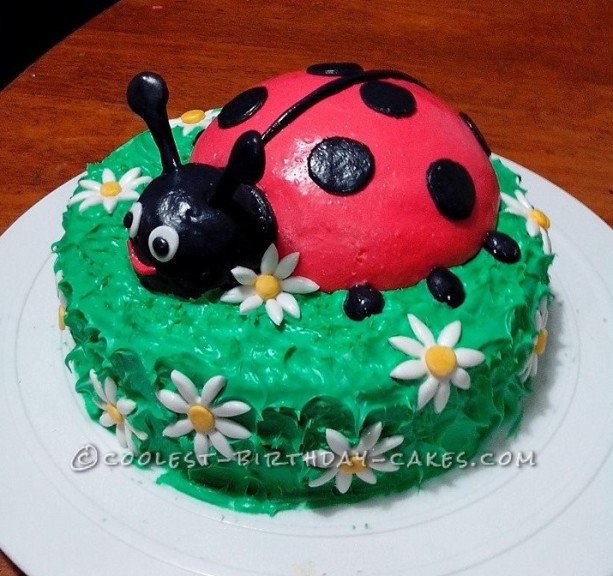 My youngest daughter turned one on March 26 and we had her party today, March 29, 2014. I have always wanted to try to make a ladybug cake so it worked out perfectly when I decided to have a ladybug themed birthday party.

This cake was simple but turned out very cute. I baked two- 8 inch round cakes, 1 cake in half of a sports ball pan, and one cupcake. I filled and stacked the round cakes. I tinted the icing green and generously covered the top and side of the cake. Once the entire cake was frosted, I used my straight edge spatula to tap the frosting, when I lifted the spatula, it pulled up pieces of the frosting which gave it more of a grass-like look.

For the actual lady bug, I used half ball cake. I applied a thin layer of icing and covered the body with homemade marshmallow fondant that I tinted red. Once the ladybug body was covered with red fondant, I placed it on the top of the “grass” covered cake. I trimmed the cupcake down to form the head and I covered it with a thin layer of icing and black fondant and I attached it to the body of the ladybug. I used black fondant which I formed around toothpicks and rounded on the top for the antennas which I inserted into the top of the head.

I rolled out a thin sheet of black fondant and cut out 8 circles for the spots. I used a thin black fondant strip down the middle of the ladybugs body to separate the wings. I then shaped 6 small black balls of fondant into teardrop shapes for the feet. I also used fondant to make eyes and a mouth. Then I rolled out a thin sheet of white fondant and used a daisy cookie cutter to make flowers which I placed randomly on the “grass”. I then used yellow fondant that I made into small balls which I flattened and attached to the centers of the daisies.