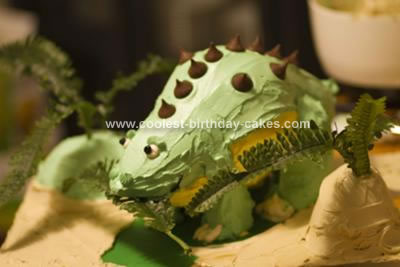 My 4 year old daughter loves The Land Before Time series of movies. Last year was Littlefoot; this year was Spike (she picked him because he is the biggest, so there would be more cake).

I built a structure up to hold the body off the ground. The structure had 4 legs and a plank that went under the body and had a dowel spike up into both the tail and the head cakes. Then I used a Wilton ball cake pan and Wilton Mini Wonder Mold cakes for his tail and head. I used parts of a couple of extra mini wonder cakes to fill in and then make his legs.

I threw in a couple extra cakes as landscaping. I like to use a variety of cake mixes, so that everyone can have their favorite kind of cake, its just a matter of finding where on the cake I put the red velvet!

I bought a $2 mini-fern from a craft store because Spike is always eating in the movies/tv shows. Then I stuck part of a fern leaf in his mouth. I covered the ground with some fondant and icing. I am terrible at piping, so I just iced the homemade Land Before Time Spike cake. I used Hershey’s Kisses for the spikes.