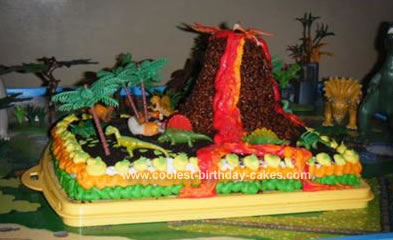 This lava Dino cake was a lot of fun to make and was quite simple. We started with a Betty Crocker Vanilla Rainbow sprinkle cake – at my son’s request. The icing used on the cake was the standard butter icing recipe with lemon flavoring since that is my son’s favorite.

The icing was then left natural for covering the sheet cake (10″ x 14″) and the remainder was colored yellow, orange, red and green. The volcano was made using the standard rice crispie square recipe with Ghirardelli cocoa added for color.

The volcano was created with a well, holding a marshmallow and then covered with icing – so that the sparklers could be secured. My son’s aunt (who actually did the official decorating) then used Oreo cookie crumbs and chocolate sprinkles to make the earth around the volcano. She then applied the different colored icing in bands around the base of the cake and added the green dinosaur Cake Mate sprinkles around the top band of yellow and around the brown cookie crumb earth.

Red and orange icing as well as a sour strawberry gel candy were applied together and draped down the volcano to simulate lava. Red sugar sprinkles were added for sparkle. Finally freshly scrubbed dinosaur figurines and plastic palm trees were added to complete the scene. A dinosaur succumbing to the lava and another dinosaur being consumed by a prehistoric gummy anaconda (complete with red icing blood) help complete this cretaceous creation.