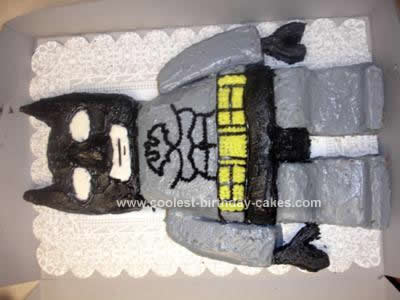 I only found one Lego Batman cake here on your website, so I used the picture and one of my son’s Lego guys as a template for a friend’s son’s 4th birthday cake. He is a Batman fanatic and specifically asked for a Lego Batman Birthday Cake .

I used Wilton’s half sheet cake pan and a 13×9 cake pan. After making the cakes, I froze them both so it would be easier to cut out each piece. I was able to cut out the head, torso, arms, hands, legs, knees, and feet from the half sheet cake. Once I assembled Lego Batman, I didn’t like the way he looked so flat, so I used the 13×9 cake and cut a smaller torso to fit on top of the original one, tapering the sides to look like a Lego torso. Every piece was cut out because Legos are pieces and made to fit together. (The only thing I did not do was a cape, and if I had had more time and experience with fondant, then I would have made one from this and laid it flat under neath or to the sides.)

I tinted homemade butter cream icing with just a hint of black to make it gray (didn’t take a lot, therefore the taste was not compromised). The body, arms and legs were all frosted in gray. I used chocolate butter cream and also added just a little black so it would taste great as well. I did the head, belt, and hands in the chocolate icing. I also used Wilton’s store bought black and yellow tubes of icings for the smaller details since the Wilton tips fit right on. For Batman’s eyes and mouth, I scooped out a little of the cake to give it a 3D affect and used Wilton’s white cookie icing to fill in (but not to the top). To outline the belt and black piece that runs through the legs, I used black shoestring licorice. For the bat on his chest and chest outline, and inside the belt, I used Wilton’s smallest star tip to decorate. After it was finished, I used black edible glitter dust just on the black parts of Batman – didn’t want him to be too glamorous! ;) Total time putting it together and frosting was about 7 hours. (Baked the cakes and made the frosting the day before)

The birthday boy and his mom and dad LOVED it! I have to say that this was probably my most enjoyable cake thus far that I have made.