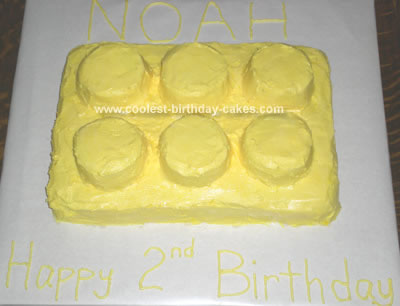 I choose yellow for the Lego block because I figured the yellow would not stain as easy as other colors. It took a good deal of food coloring to make the vivid color. I would normally use gel food coloring but decided on liquid coloring for this project; I was afraid that the large amount of gel may create a taste in the icing.

The hardest part of this cake to me was icing between the dots. I did not have a spreading utensil small enough to easily fit. I found the small metal knife from my son’s eating utensil set was the perfect size!

For the party, we used some of my son’s blocks as decorations. We also used square plates instead of round ones to help further the theme. My son was so excited about his cake block!!