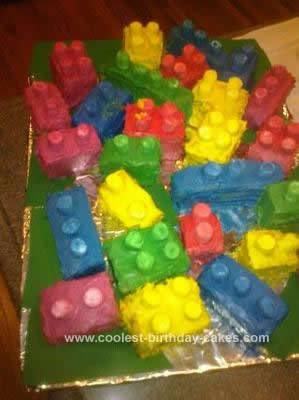 My son ended up with THREE birthday cakes this year, all in the Lego theme. I used this Lego Blocks Birthday Cake for his class party. It was easy to serve and the kids were VERY impressed! I was just grateful that I came up with something recognizable:)

I started with a box mix of funfetti cake (what can I say he is five). To the cake mix, I ALWAYS add 2 snack cups of vanilla pudding. It keeps the cake moist and makes it taste almost home made :)

After the cake had cooled, I froze it for 24 hours. While it was still frozen, I chopped it into assorted Lego shapes. I trimmed off the ends for neatness, but that actually makes it harder to frost. Note to self: Cut cake crumbles when frosted! If I do this again (and I have another request) I will keep most of the cake in the freezer and only remove a couple of the pieces at a time to frost.

I used regular butter cream frosting which I doctored with almond extract. Then I used Wilton gel food coloring to get the colors I wanted. I went for the primary colors in the Lego bin. The red was too pink for my liking, but I eventually gave up. Next time I will start with a pink frosting which should be easier to turn red.

For the Lego “bumps” I used mini marshmallows, that I rolled in the icing. I placed these on top of the pieces in Lego configuration.

For the base of the display, I used Wilton sugar paper in green, which made it look like the Lego boards my kids use to build their creations. Unfortunately, I missed judged the size and had to chop up the sugar paper, to cover the blank parts of the tray. Oh well, live and learn!

NOTE: Frosting this took me a good 2 hours, so plan ahead! But the look on my son’s face (actually both my son’s faces) was so worth the time.