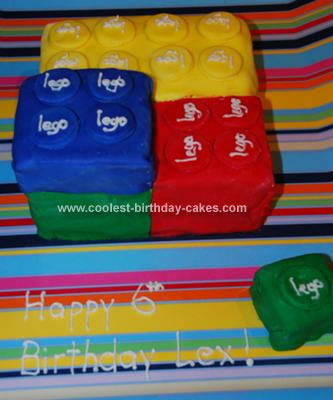 For this Lego birthday party, I knew I was going to make a Lego Cake. I wanted to use buttercream icing, but I just couldn’t get the sides to form squared corners. Silly me, I thought this would be an easy cake since it was just squares. I’m not a very patient person, so I probably could have done it, but I decided now would be the perfect time to learn about fondant.

I had bought a packed of pre-colored primary fondant just in case. It was way easier to work with than I imagined. I had the cake pieces already cut and frosted with buttercream, so I could just peel off the fondant if it tasted gross (which is what I’ve heard) when it came time to serve the cake. The buttercream also served as a “glue” for holding the fondant on.

I opened each package of fondant and rolled it out using a little powdered sugar to keep it from sticking to my counter. Then I placed it over the piece of cake I was working with and formed the corners by cutting away portions and wrapping it around like a present. I used the left over fondant from each color to cut out the nubs. I had to stack a few circles together because I had rolled it pretty thin for the cake. I put a little sprinkle of water in between each circle to hold the stack together. After those were positioned on the cake, I piped “Lego” on the each nub. Again, if I wasn’t so tired this night, I should have done each “Lego” word in the coordinating icing color.