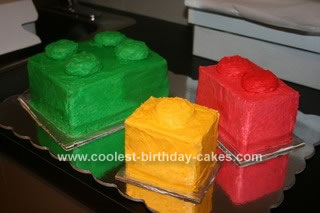 For my son’s 7th birthday we decided on a LEGO theme party. I had originally intended on ordering the cake through one of our specialty cake shops but was quoted $120. Honestly, I felt that was just too expensive so I set out to make my own LEGO cake.

I made two 9×13 cakes, one vanilla and one chocolate. I cut one in half and made a double layer cake with 4 knobs on top. The other cake was cut in half and then divided into one cake that had 2 knobs and one that had 1 on it. I decorated each one with a different color of buttercream icing.

For the knobs I tried a few different ideas and finally settled on rice krispie treats cut into circles and then covered with fondant. I then iced them with colored buttercream icing.

This was a pretty easy cake to make and was a huge hit at the party.